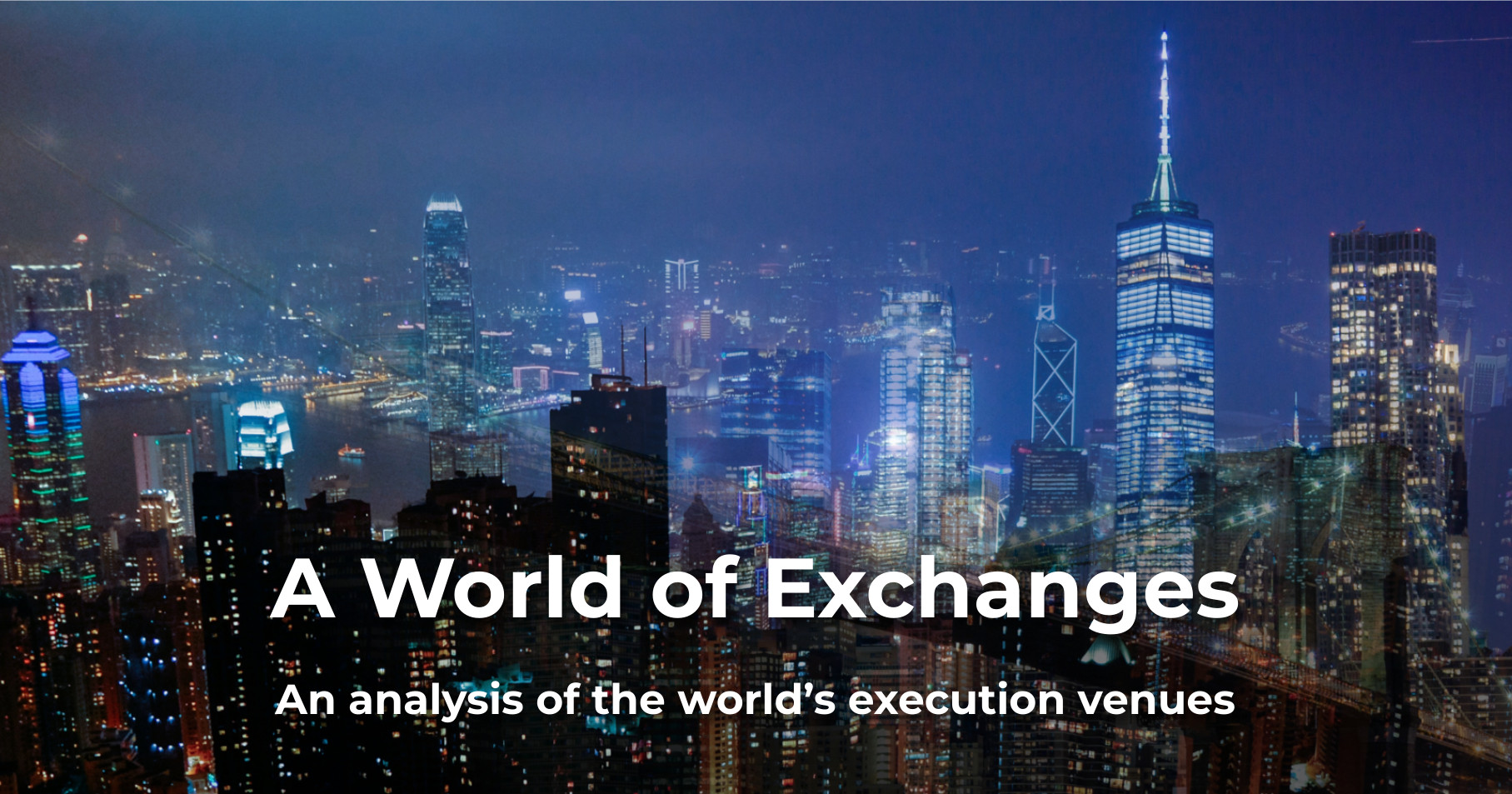 A World of Exchanges

An Overview of Organised Markets
and Stock Exchanges

As part of our internal research we explore the number of execution venues (including organised markets and exchanges) that currently exist, the rate at which they are increasing, and how they are globally distributed. We thought we'd share the basics of that research as it makes for some interesting reading. To make this easier to visualise we've also included an interactive map of all identified venues placed to their nearest city, and in some cases their office address. We've also included some basic analysis of the distribution of markets globally with some simple graphs to visualise the results.

It should be noted that we identify each venue based on whether or not it acts as an execution market in its own right. That means for example that an exchange may in fact operate several markets for differing market segments, either for practical or regulatory purposes. In that case there might be one overall operator for a number of market segments with each segment represented by a unique market or execution venue. Throughout this article we loosely refer to markets or venues to mean the same thing. The choice of term has been dictated by what reads better in a given context. This also means that when we talk about an exchange like the New York Stock Exchange we are actually talking about multiple markets, including for example NYSE Arca and NYSE Amex Options to name just two.

There are a number of places where you can look to build up a picture of what's going on in the world of exchanges, and execution venues in general. First there are a number of federations which many execution venues are members of, either individually, such as National Equities Exchange and Quotations, or as part of a larger group like NASDAQ or ICE. The main exchange federations are shown below in Table 1 along with an indication of the numbers of members and how many markets (or venues) they represent. The member numbers only include members who operate markets, so organisations such as CSDs are not included. Further, for simplicity, we have included all members regardless of level. The goal is not to detail precisely the membership structure of each federation but instead to give an indication of the reach of the federation.

... a universal method of identifying exchanges, trading platforms, regulated or non-regulated markets and trade reporting facilities as sources of prices and related information in order to facilitate automated processing.

We've combined both sources of information to build a basic world map of venues and do provide some basic geograpical analysis.

There are of course groups who specialise in collating information about exchanges and execution venues, such as Mondo Visione who also publish an index of listed exchanges. We've only used exchange federations, MIC codes and direct sources to collate the information presented here though.

The figures presented are not guaranteed to be entirely precise. A combination of scripts and manual checking were used to compile the data. As a result some assumptions have been made about the accuracy of the source data. Without extensive manual verification it is quite possible there are some discrepancies. For example, MIC codes are in most cases accurate but a few that should be retired aren't, for example Island ECN is long since gone and The Green Stock Exchange is no longer in existence. The same warning applies, but to a much lesser extent, to the data retrieved from federation memberships. Change happens and sometimes faster than can be reflected. The purpose of this effort was to see trends not catalogue all venues in detail.

Cryto-venues are not covered by this, and there are quite a few, as shown on places like CryptoCoin Charts and CoinMarketCap. There are also undoubtedly several small regional commodity (or other) markets that are known locally but have no international footprint, no MIC code and so on. Some are included here simply because we happen to know of them, for example the Mercantile, Exchange of Belize Ltd.

Bear in mind almost none of the markets will actually be operated out of the addresses shown. In almost all cases the venues will be operated out of a datacentre which may even reside on a different continent, particularly in the case of some of the emerging economy markets. Further, many markets will have fail-over sites in yet other locations. The map is not intended to capture any of that detail.

With all that said let's take a look at some numbers. First what's the global distribution like at a high level? We'll start by looking at the breakdown of venues by continent as shown in Figure 1. It should be noted that we are actually using the region and sub-region definitions adopted by the UN Statistics Division (UNSD) which comes with the following caveat:

We've also tried to keep our continental groups close to the classical interpretation with North America including everything not in South America. Once we look at sub-continents, or more precisely sub-regions then we will directly follow the classification adopted by the UNSD.

As we can see Europe dominates. Basically Europe has almost the same number of execution markets as the rest of the world combined. When we start to break this down further to look at sub-continents we see a similar story, but perhaps with a little more granularity. We can also see how North America starts to show its importance. Figure 2 has the detail.

We see a similar pattern repeating if we look at the top 20 countries, by number of execution markets, as shown in Figure 3. Here we see the United States of America topping the charts highlighting how its neighbour Canada, while still in the top 20, contributes a comparatively small number of venues to the North American total. We also see clearly the dominance of the United Kingdom and the United States when compared with other countries.

Lastly let's take a look at which cities have the highest concentration of execution markets. This is shown in Figure 4 and there should be no real surprises here. London and New York are the undoubted financial capitals of the world, and the sheer concentration of markets that exists in these two cities completely out-strips anything seen anywhere else. Now of course such a basic and trivial analysis doesn't tell us as much as we might think but it does at least meet with our expectations: that London and New York dominate capital markets.

Now that we've spent some time looking at a basic geographical breakdown of markets globally it makes sense to get a sense of how these relate to common economic regions. Figure 5 shows the number of venues associated with primary economic groups, such as the G8 and BRICS. We've split G8 into two lines, one showing the number of markets associated with the direct members of G8 and one showing the total if you include all the countries that comprise the EU in addition to the direct members.

It comes as no surprise that G20 (which includes G8) has the largest number of markets associated with it. In fact if you combine the United States with Europe you basically get very close to the G8 total as would be expected from the list of G8 members. What's more interesting to look at are the developing and emerging economic groups. BRICS (Brazil, Russian Federation, India, China and South Africa), O5 (Brazil, China, India, Mexico, South Africa) and MINT (Mexico, Indonesia, Nigeria, Turkey) all have much smaller numbers of markets which suggests there is some way to go in terms of opening up their regions to greater competition.

To be clear we're not saying this is a bad thing, just making the observation. The actual market health of the regions: how much volume exists, the ability to access the markets, the costs of doing so, how well they are doing economically and so on are all questions that cannot be answered or explored by a rudimentary glance like this one.

It would be remiss to leave the discussion on interesting numbers if we did not look at the top 20 (or so) exchange groups by the number of markets that they operate. It is important to note that this information is likely to be both the most fluid, and have the highest chance of being inaccurate. It is not always clear how many markets an exchange group operates and further we have not exhaustively verified the figures that we'll show to ensure all subsidiaries or group members are accurately accounted for or that there hasn't been a recent merger that changes things yet more. With that in mind there may be glaring inaccuracies or out-of-date information on display. Having said all that the numbers should be somewhat useful if discretion is exercised.

To get an approximate top 20 we will list all the exchange operators who have 9 or more markets. Chosen solely to get the number of groups as close to 20 as possible. In fact we have a top 23, as shown in Figure 6 below.

It is no surprise the chart is dominated by US and European groups.

The Growth in number of Markets

Figure 7 shows the change in the number of MIC codes since their first publication in 2004.

That's a steady growth of roughly 7% every year in numbers. In other words approximately 70 new venues a year. That's more than one new venue registered every week. No matter what way you look at that it's a very large, consistent increase. Given that most of the increase in numbers is occurring in well established markets like Europe and the US it might suggest fragmentation, but it might also suggest improved inter-market communication allowing more markets to co-exist competitively.

We'll leave this brief foray into the global distribution, and numbers, of markets with a couple of observations.

First it is interesting that we have a steady increase in the number of venues which doesn't correlate with a likewise increase in the size of the markets they participate in. In other words we don't see a 7% growth in equity market sizes, just more venues operating in those markets.

Second, as we mentioned, some people might suppose the growth in the number of venues means we have greater market fragmentation and naturally assume this is a bad thing. What's interesting also is that the growth in markets is concentrated in the already congested European and US markets. While frontier and emerging economies are seeing growth in the number of venues, that growth is a fraction of the rate we see on average globally, as dominated by Europe and the US. This suggests there is a lot of headroom in frontier, emerging and developing regions for significantly more execution markets to operate, given the right regulatory and economic environments.

Finally there has been much talk in recent years of market fragmentation and its detrimental effects. The speed of markets has also come under much scrutiny with some suggesting that we need to prevent further fragmentation and even slow markets down. This cursory look at market numbers alone tends to suggest that there is not, in fact, a direct correlation between fragmentation and speed, and an evaporation of liquidity. In recent years the total market caps have remained within reasonable rates of change despite very aggressive changes in the numbers of venues operating in those markets. It might be more correct to say that improvements and innovations in both exchange infrastructure, speed of trading, connectivity, increases in electronification and general market efficiency improvements has allowed more venues to participate in markets. The question then is have these improvements actually facilitated more fragmentation while offering a more competitive landscape to traders, improving markets overall?