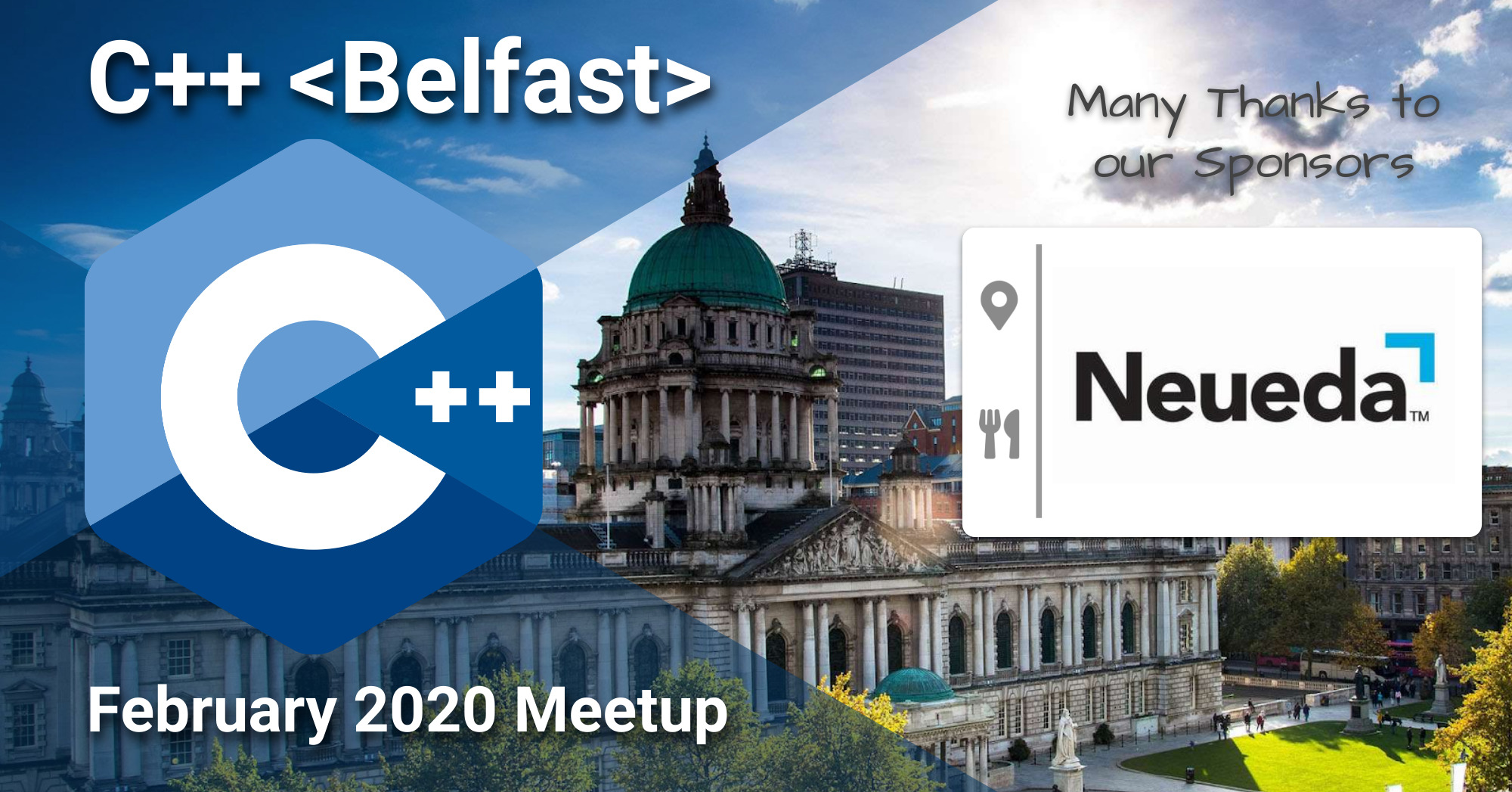 Pipelines and Buses in C++

Quite a few weeks ago on Thursday the 27th of February we held another C++ meetup, this time graciously hosted in Neueda's fantastic new offices. Not only that they put on a fantastic spread of beer and pizza!

This event marked the best turnout yet at a meetup with many more present that had actually signed up to attend. I counted about 50 people which was a wonderful turnout and no doubt helped by the efforts Neueda put into promoting the event on the run up to the meetup.

Normally I give a roundup of companies who had people in attendance but this time that's a lot harder than usual as we had such a good attendance so I'm going to skip that. Suffice to say all the usual companies had representation plus a few more!

Instead I'll make a comment on the location for this meetup - Neueda's new Belfast offices in Lanyon Place. It's probably fair to say that this was probably the best equipped setup we have seen for hosting a meetup: a large 86" touchscreen, proper sound system with wireless mics, good seating with plenty of overflow area, and a kitchen all in the one place! I'll put some photos up we are able to get some.

With all that said, let's get onto the write-up of the night itself...

Introduction from the host

First up we had Ryan Eastwood of Neueda - who was the main driver behind making sure this meetup happened - gave a talk about some of the interesting work that Neueda is doing, particularly in the C++ space. It was great to hear in a more detail some of the things going on in our local community.

From the talk it looked like Neueda are certainly getting to work in some interesting areas and have a strong C++ capability within their company which is great to see. I think the large Neueda attendance at the meetup was a testament to that.

Next up I did the usual intro part of the meetup: thanked the hosts, give an overview of what to expect from the rest of the evening, and also made any announcements.

As in the last meetup I recapped on the Belfast C++ Landscape initiative and presented a link to the online form which I'll use to capture the information submitted by meetup members. You can find that link in the slides below.

I then moved quickly on to my promised trip report for the Prague C++ Standards meeting where we voted out C++20, but I cheated a little and instead presented this video which does a much better job!

Last but not least, I made a few announcements about the next C++ Standards meeting in Varna, Bulgaria and the just decided (at that time) ACCU Autumn 2020 conference, in Belfast, in October.

However! since the meetup and now, COVID-19 has changed things considerably, and now the Varna standards meeting is cancelled, and, sadly we've had to also postpone the planned ACCU Autumn 2020 to ACCU Autumn 2021. Dates are yet to be confirmed for 2021 but as soon as they are known I'll announce them in the meetup group and on the blog here.

With that all covered off we then took a short break to stock up on more beer and pizza before launching into the main event of the evening - a re-presentation, by me, of Chris Kohlhoff's ACCU Autumn 2019 talk, "Coarse grained application composition using Pipelines and Buses". The abstract is below:

In the world of low latency finance we are required to build systems that must provide high performance across multiple dimensions, for different deployments, but on the same codebase. We also are required to support very strict failure recovery and availability guarantees to meet ever increasing regulatory demands.

In that environment a pipeline and bus architecture, in the spirit of algorithmic architecture (previously presented at ACCU 2016 and also explained in The Problem with Finance), can be a highly effective composition technique for building such high performance systems.

This talk will introduce the foundational libraries and techniques that support such a technique, and dive into some of the ways these libraries can leverage modern and future C++ features to solve common architectural problems in performance critical domains.

If you missed the meetup, or where there and want a reminder, then here are the slides: